DISCLAIMER: DON'T BUY THESE FIGURES UNLESS YOU ARE PREPARED TO BINGE WATCH

Yep that's right I said it, as soon as you start seeing these figures you'll want to re-watch the James Cameron's summer of 1986 blockbuster Aliens.  I had a hard time thinking of another film where the "second movie" the sequel really turned a motion picture into a dynasty. This one hit home though, action packed as soon as they land on LV-426 this movie is cyclone of action scenes with people being eaten, chased, and otherwise terrorized.  Super7's highly articulated line of ReAction Figures brings this story back like all their figures with more nostalgia than you can shake a stick at. 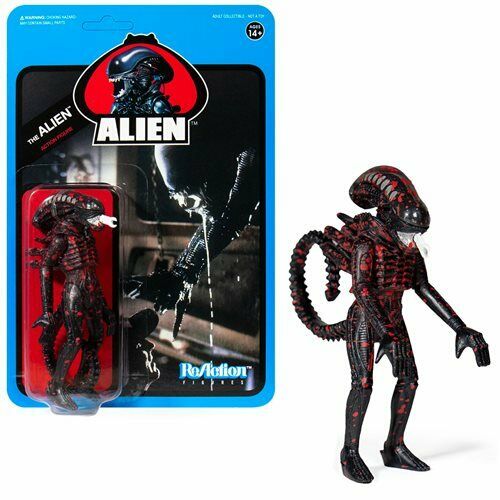 My absolute favorite though is still the limited edition Bloody Open Mouthed Alien complete with mouth sucking aperture.  Which I admit isn't a phrase I get to use often but hey while I love horror movies for the suspense a little gore never hurt one either. Especially how the violence in this series actually contributes to moving the plot long along even as it scares you to pieces.  The blue card back here from Super7 is the sign of a special release and a must add to your collection.

3 Colonial Marines dominate the main line sequence of this series starting with my favorite PFC Vasquez who was a true-blue no Mary Sue action figure.  From the time she decides to wake herself up with pull ups to the time she detonates herself with a grenade Vasquez spends most of the movie firing rounds from the biggest gun available or her mouth with some classic one liners.  Her exact opposite is of course PFC Hudson who never met a situation he couldn't over-react to, from Bishop swinging a knife between his fingers or the great line "It's all over man, it's all over" Hudson belly ache's through the whole film.  Then again come to think of it - maybe he was just being realistic? 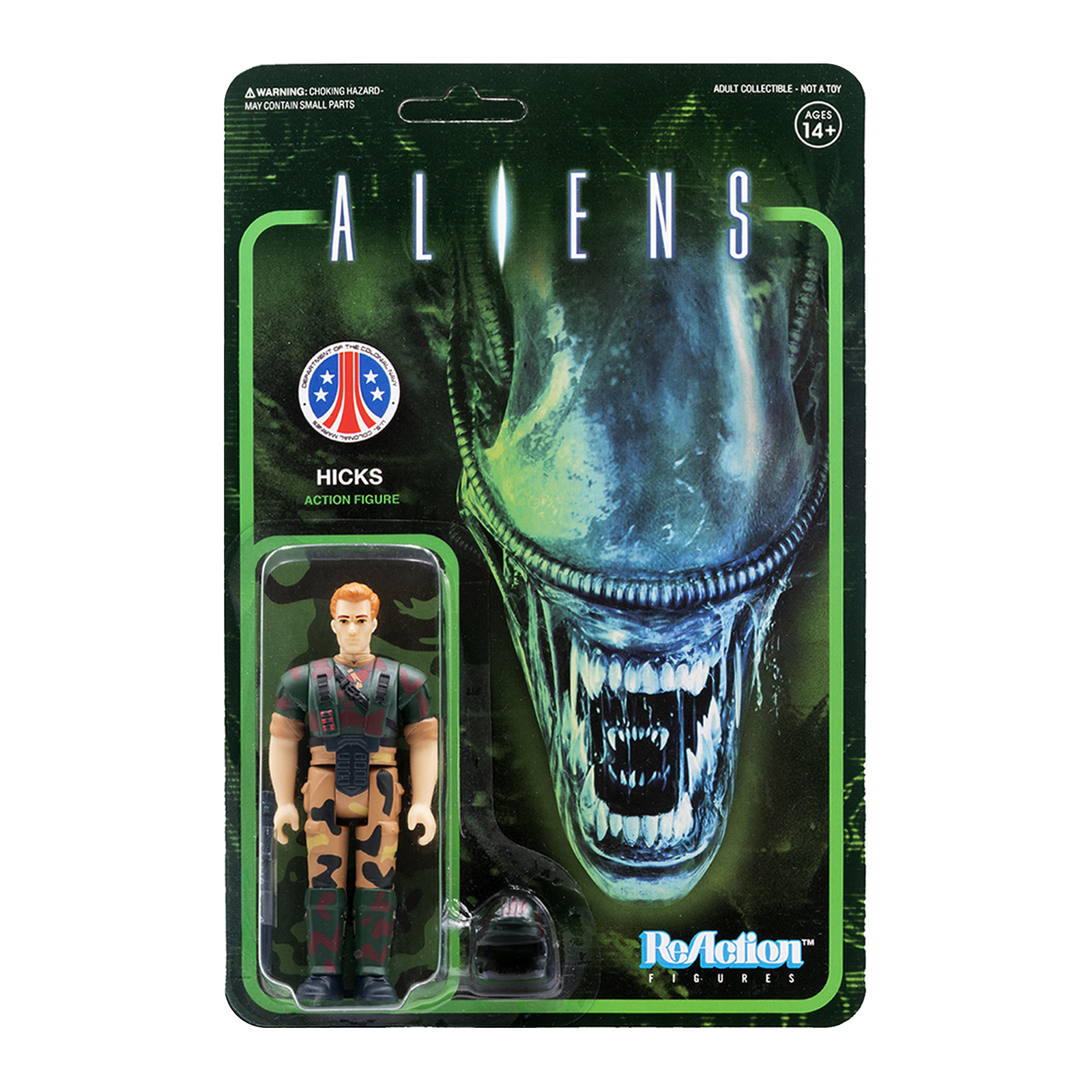 Or he could have been like Cpl Hicks who assumes command of the mission defenses and guides Ripley, himself , and Newt to an escape (at least until the sequel to the sequel - which was kinda boo!) but Hicks is calm and cool under relentless Xenomorph induced pressure.

Ellen Ripley is here and I won't belabor the Sigourney Weaver points..for a minute I didn't think she looked much like Weaver but then I re-watched and yes Sigourney just like the rest of us once looked much much younger.  However the "hero" to me of this action figure line , after my personal favorite Vasquez, is Bishop.  I just love when action figures are made in memory of a movie and they incorporate real scenes.  Here Bishop everyone's likely bad guy who turns out to be good can break into two-pieces just as he did in the film. 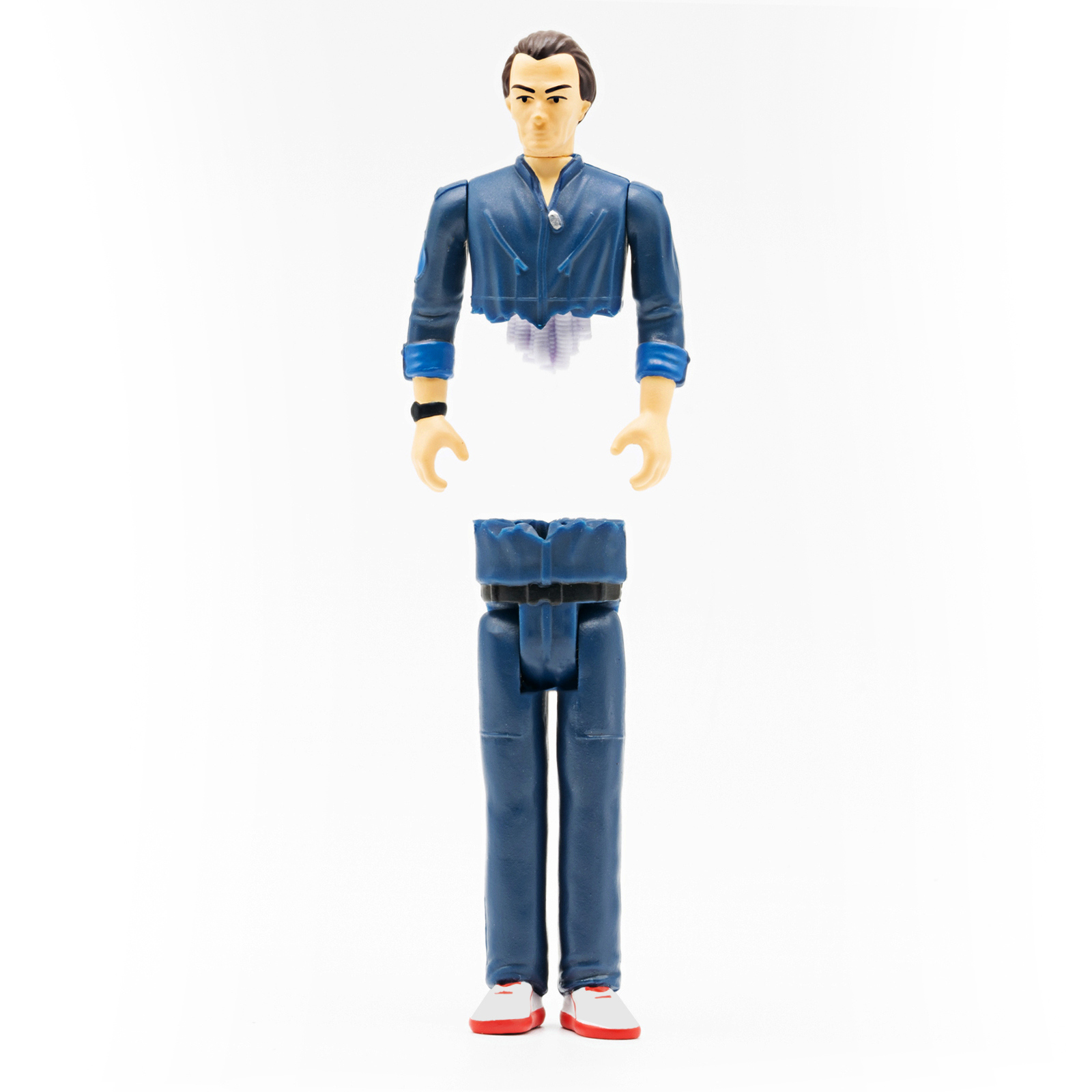 Also if you need some variety in your aliens we still have the classic (yes it is check the movie) "dusty brown" clean xenomorph look alien in Super7 style along with just a few of he Midnight Black more ominous looking Aliens.

Take home one or more today from Keenga Toys- after all it's not just the figures you are collecting - it's the cards and no one does a better job with carded figures than we do right here at Keenga.