Finally..Finally...Finally!  Hasbro looks like it finally got it right on Star Wars action vehicles with the New Mission Fleet line. Each figure is done at 2.5 Inch scale and details one of the iconic characters and vehicles from the Star Wars series. What I love is that they honed in on not just one movie or CGI/live action series but rather produced a line of vehicles that captured the best from across the Star Wars line.  You see plenty from The Clone Wars (and hopefully soon Rebels) The Mandalorian is here plus some vehicles from the classic original trilogy. Each of the mission fleet vehicles comes with an action figure plus the vehicle and it's ideal for play.

Millennium Falcon this is made as the largest of the mission fleet vehicles so far - its obviously what you think of when you think about Star Wars Vehicles and "The Falcon" factors into the original and sequel series.  The Falcon is depicted here with Han Solo and blaster, has a functional cock pit and cargo hold. It also has removeable "firing" turrets. 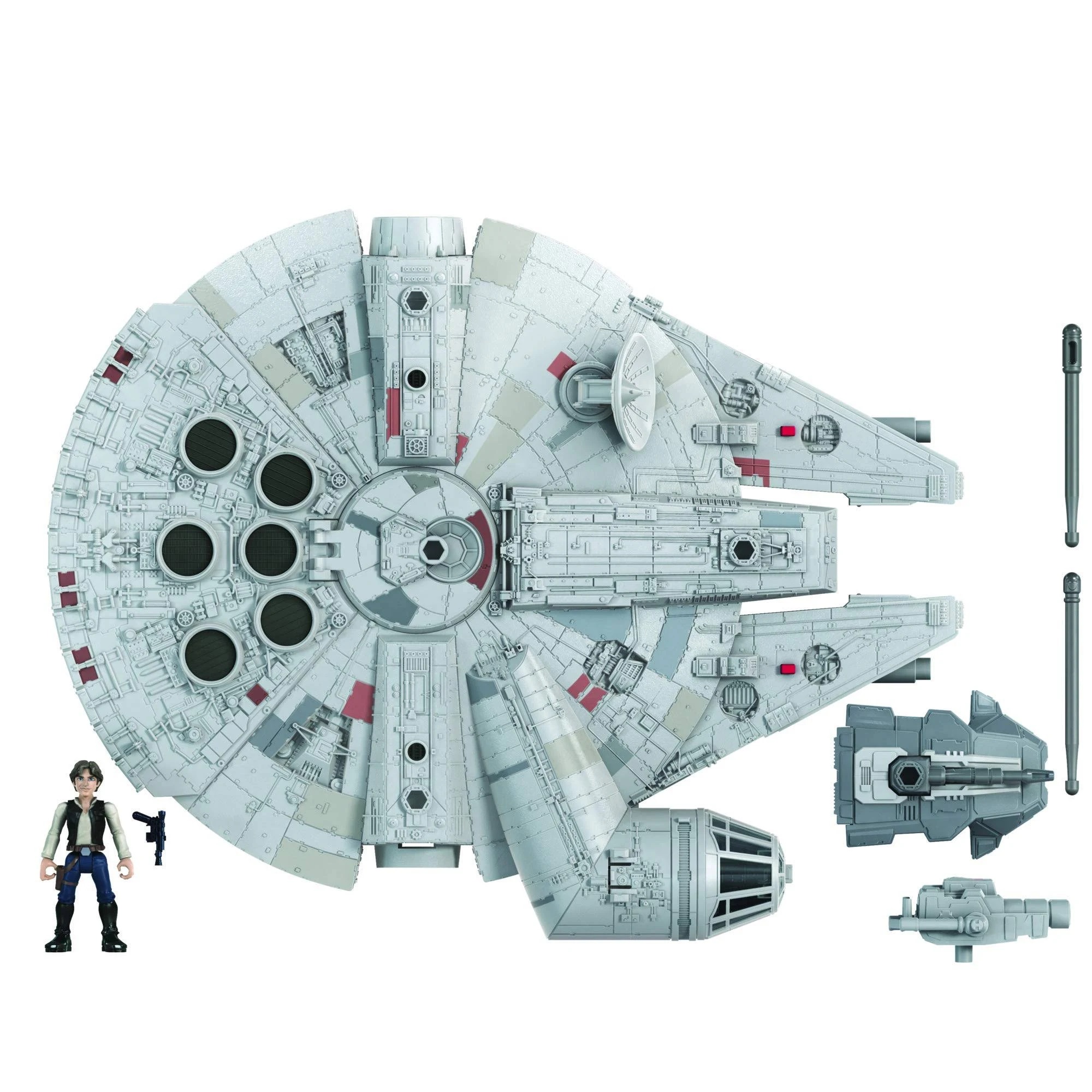 They may have pushed it a bit "Vehicle wise" with the Mandalorian addition but how do you pass on Mando and Baby Yoda as figure editions. Mando straddles as Speeder Bike in this expedition class edition to the fleet. While the concept maybe stretched the accessories are not, you have Baby Yoda in Prim, Mando's long and short blasters', a jetpack for Mando, and Speeder Bike has a firing bolt. 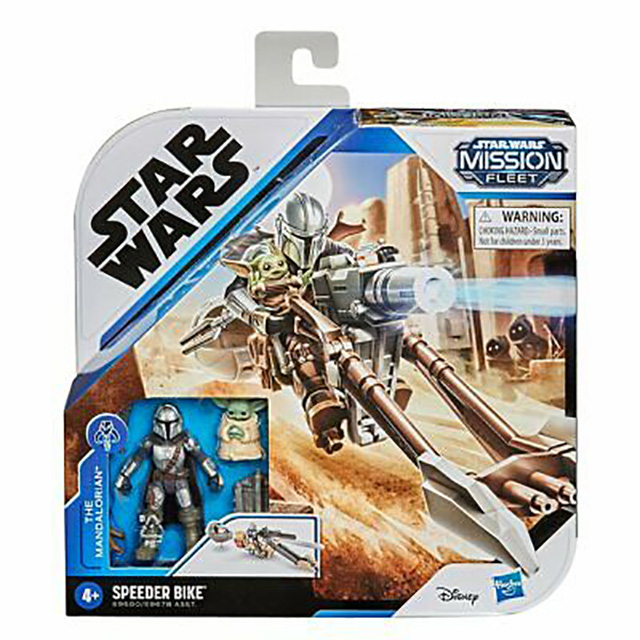 The Clone Wars entered the race with Captain Rex on an AT-ST Walker.  Rex is totally decked out for battle in the 2nd vehicle of the Expedition Class; he's got twin blasters, the AT-ST has a repeating bolt cannon and it's up on two-legs like a Grand Army of the Republic Walker edition should be (before they became imperial and smoothed). 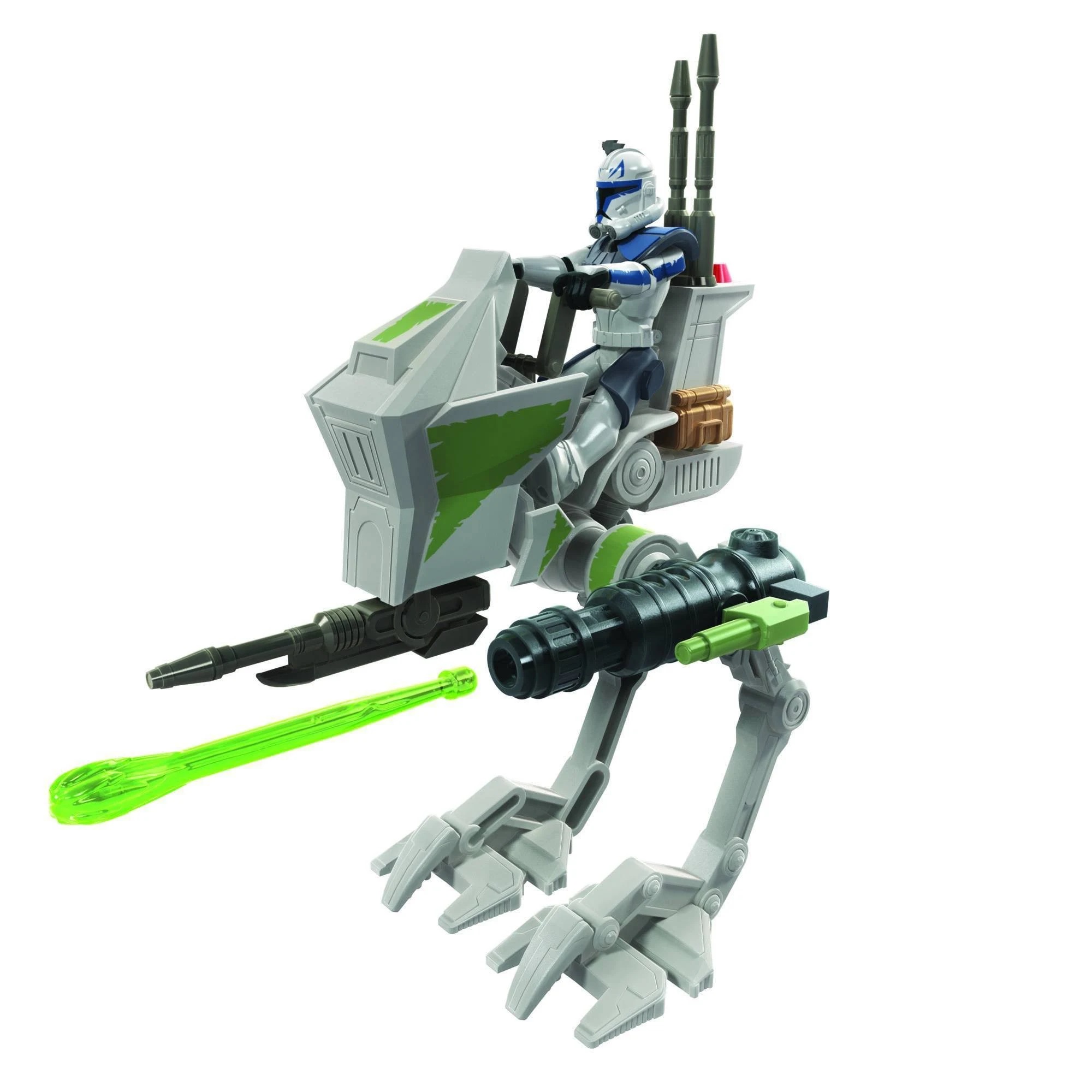 Obi-Wan Kenobi Jedi Knight Speeder Bike (also known as the BARC Speeder) is also from the Clone Wars and its what you see this CGI version Obi-Wan racing around in. Obi-Wan has a lightsaber, the vehicle has a side companion seat and repeating fireable cannon.  It's perfect for play. 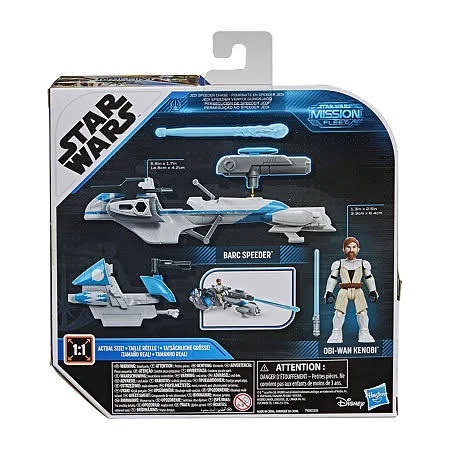 Anakin Skywalker uses the battle tested Jedi Starfighter as seen in Revenge of the Sith it's a Stellar Class designation; Anakin has a lightsaber of his and the Starfighter comes with working side guns; overall the vehicle captures the sleek design of the high period of the Grand Army of the Republic. 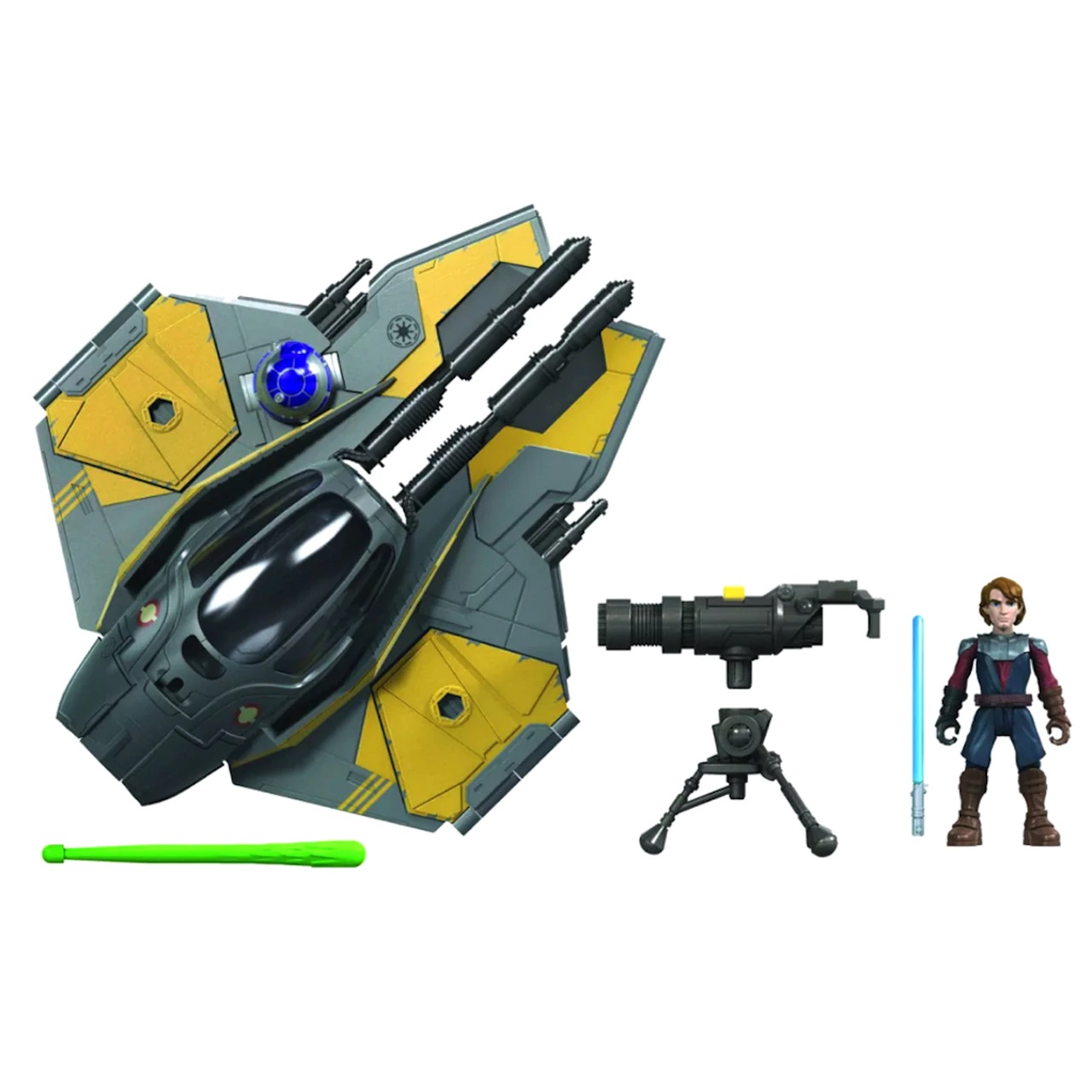 Of course just because the vehicles embrace a larger pantheon of vehicles doesn't mean they don't also reflect some great early favorites.  That includes a Jedi X-Wing Fighter "Red 5" with Luke Skywalker in the cockpit not sure the side cannon piece here is great except for ground attack mode (I would have preferred they work it into the underbelly) but the overall look and feel (plus another working cockpit) makes it a must have.  Countering Luke's X-Wing is of course his daddy's Tie Fighter. Darth Vader's Tie Fighter has Vader of course with lightsaber but also a working top open Tie cockpit (Hasbro got it in the right position this time) and cannon set.  They round out the Stellar class vehicle sets. 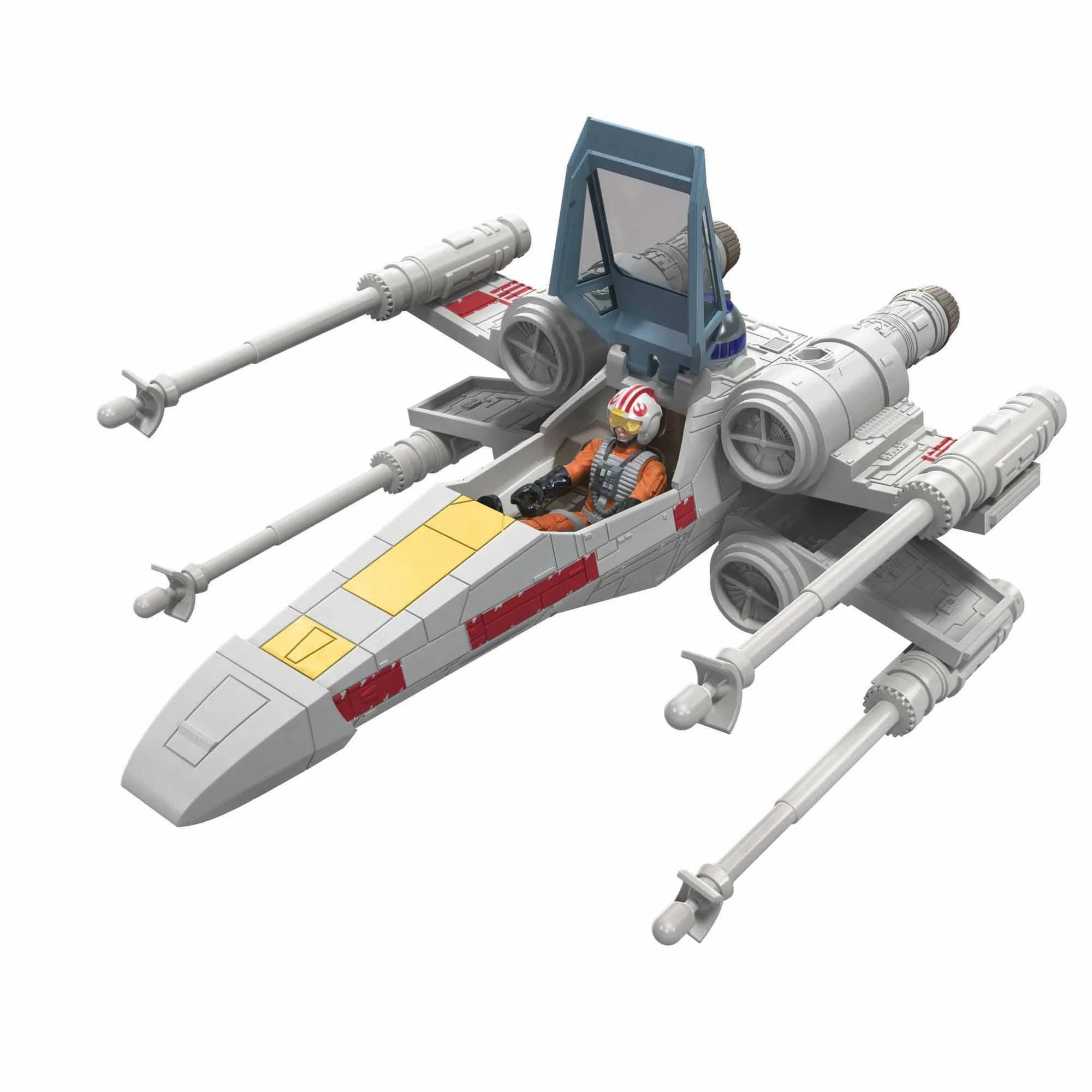 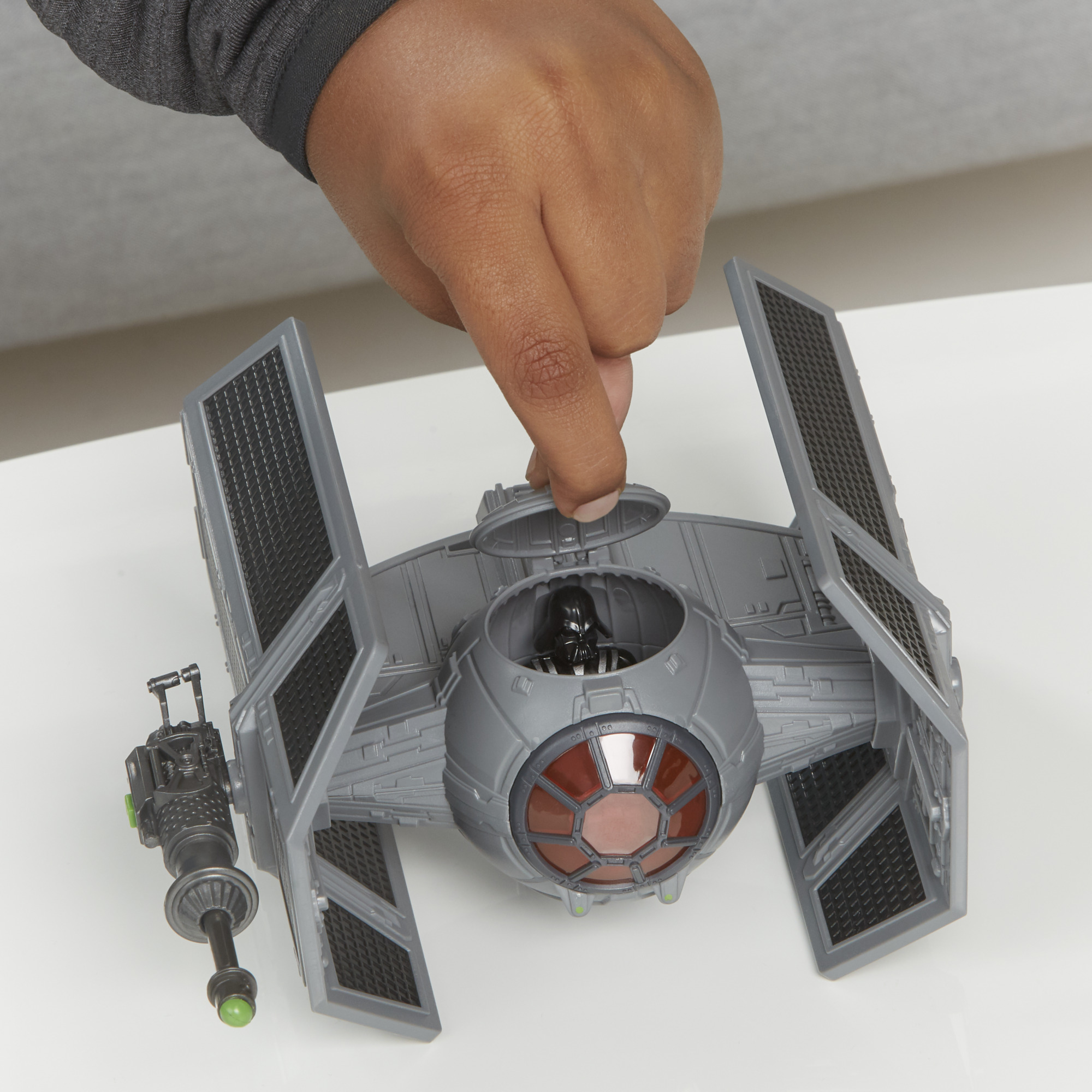